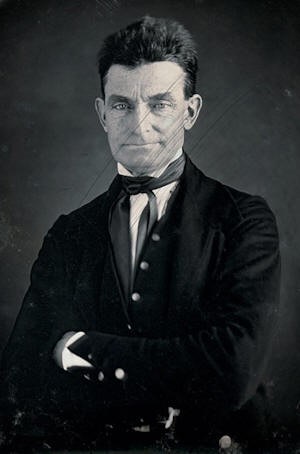 John Brown (May 9, 1800 – December 2, 1859) was an American abolitionist. Brown advocated the use of armed insurrection to overthrow the institution of slavery in the United States. He first gained national attention when he led small groups of volunteers during the Bleeding Kansas crisis of 1856. He was dissatisfied with the pacifism of the organized abolitionist movement: “These men are all talk. What we need is action—action!” In May 1856, Brown and his supporters killed five supporters of slavery in the Pottawatomie massacre, which responded to the sacking of Lawrence by pro-slavery forces. Brown then commanded anti-slavery forces at the Battle of Black Jack (June 2) and the Battle of Osawatomie (August 30, 1856).

In October 1859, Brown led a raid on the federal armory at Harpers Ferry, Virginia (today West Virginia), intending to start a slave liberation movement that would spread south through the mountainous regions of Virginia and North Carolina; there was a draft constitution for the state he hoped to establish. He seized the armory, but seven people were killed, and ten or more were injured. He intended to arm slaves with weapons from the arsenal, but only a small number of local slaves joined his revolt. Within 36 hours, those of Brown’s men who had not fled were killed or captured by local farmers, militiamen, and US Marines, the latter led by Robert E. Lee. He was hastily tried for treason against the Commonwealth of Virginia, the murder of five men (including three blacks), and inciting a slave insurrection; he was found guilty on all counts and was hanged. He was the first person convicted of treason in the history of the country. 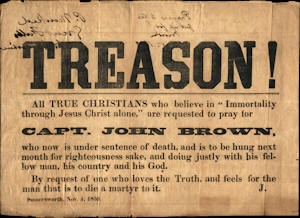 Historians agree that the Harpers Ferry raid and Brown’s trial, both covered extensively by the national press, escalated tensions that led to the South’s secession a year later and the American Civil War. Brown’s raid captured the nation’s attention; Southerners feared that it was just the first of many Northern plots to cause a slave rebellion that might endanger their lives, while Republicans dismissed the notion and claimed that they would not interfere with slavery in the South. “John Brown’s Body” was a popular Union marching song that portrayed him as a martyr.

Brown’s actions as an abolitionist and the tactics he used still make him a controversial figure today. He is both memorialized as a heroic martyr and visionary, and vilified as a madman and a terrorist. Historian James Loewen surveyed American history textbooks and noted that historians considered Brown perfectly sane until about 1890, but generally portrayed him as insane from about 1890 until 1970, when new interpretations began to gain ground. 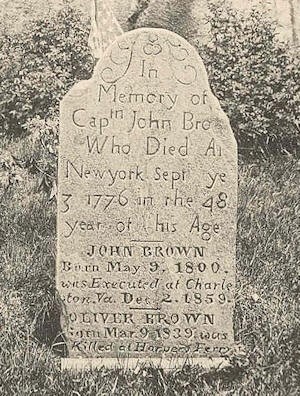 John Brown’s Grave (the tombstone is now enclosed in glass)